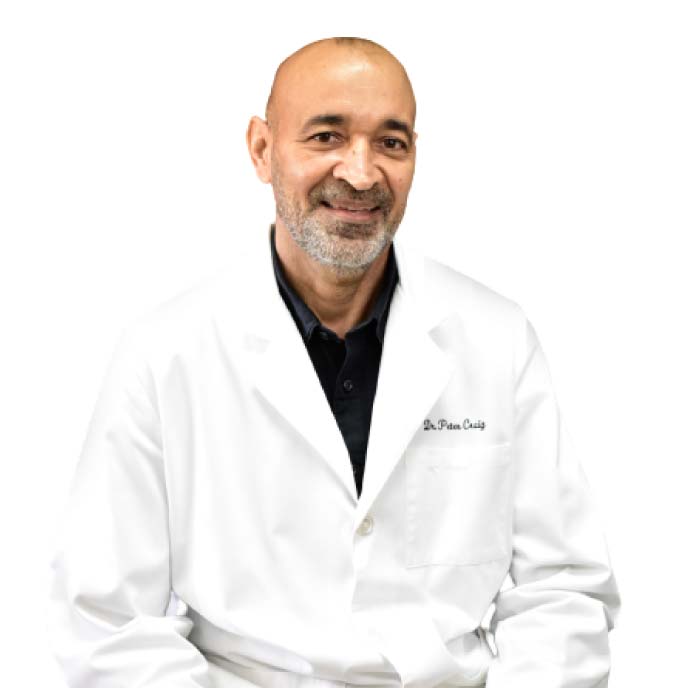 Dr. Peter G. Craig grew up in Belize City where he attended both high school and sixth form at St John’s College. He attended and graduated with his MB BS degree from the University of the West Indies in Jamaica in 1986. Dr. Craig returned to Belize in 1988 after completing his internship at the Princess Margaret Hospital in Nassau, Bahamas.

He then served with the Belize Defence Force (BDF) as the country’s first Force Medical Officer for 16 years, retiring with the rank of Lieutenant Colonel. He completed a Master’s Degree in Tropical Medicine & Hygiene (MTM & H) from the Uniformed Services University of the Health Sciences in Bethesda, Maryland in 1992 and later earned a Master of Science (MSc) degree in dermatology from the prestigious St. John’s Institute of Dermatology, London, in 1996. He was admitted as a Fellow of the American Academy of Dermatology later that year.

During his years with the BDF, Dr. Craig became the leading local expert in the diagnosis and treatment of tropical skin diseases, particularly Cutaneous Leishmaniasis. He presently is in private practice at the Belize Healthcare Partners Ltd Medical Complex in Belize City.

As a physician, Dr. Craig enjoys the examination, diagnosis, and problem solving of medical and surgical concerns of his patients. He sees dermatology as a three dimensional puzzle that can be examined and engaged using skills developed over his years of clinical practice.

He regularly attends annual meetings of the American Academy of Dermatology and is also an active member of the Caribbean Dermatology Association (CDA) and has served as the President of this well recognized regional medical association during 2010 to 2012.

Have a question? call us now

Need support? Drop us an email

Do you want to checkyour lab results?